During the month of November we are celebrating and acknowledging the dedication, hard work and time it takes to be an officiate in sport.

Charlene has been a BMX Racing commissar for 4 years now. She has been a part of the BMX community now for about 7 years. Her sons were 3 and 5 when they started racing on the
track. Her daughter then started when she was 3. Charlene got on the bike after many years of watching and loved it! Charlene's husband also races and it has become a great family sport where everyone can participate and enjoy it!
Charlene has now stepped back from racing herself and is more involved in helping run the club and officiating at races locally, provincially and nationally.
She loves the culture of BMX and the community. Everyone is always so nice and supportive of one another. Charlene took the course to become a commissar a few years ago and volunteers her time where ever she can help!
Charlene doesn't have one specific favourite memory from officiating. She loves volunteering, meeting new people and learning all of the different positions there is to volunteer for. The best part of it is that she gets a front row seat at the track to watch the action up close!

Deirdre has been a Figure Skating judge for over twenty-five years. Deirdre got into officiating as a senior skater when she was 16 and was asked to help in a club competition. She loved the volunteering as a way to help develop new skaters so she has continued ever since. It gave her the opportunity to give back to a sport and community that gave her so much and continues to give her.
There are many experiences that officiating has given Deirdre; it's difficult picking just one favourite memory! She remembers the first time she awarded the highest mark at she could give to an element that a skater performed in their program. It was a gorgeous triple axel at a national level competition.

Jennifer has been a Judo officiate for 12 years. She became an officiate because the organizers were short-handed for volunteers at one event. Refereeing is a great way to volunteer and give back to the sport. Once she tried it, Jennifer realized it was a great way to be close to the action and enjoyed meeting
other local, national and international people because of it.

Jennifer used to compete in Judo herself and has now transitioned into officiating. Jennifer loves when she gets to travel out of province as an officiate and meet new people. In January 2020, Jennifer was invited to officiate in Montreal for Elite Nationals and it was a combined event with the International Blind Sports Association (IBSA) Pan-Am
championships. She got to experience how judo is accessible to visually-impaired athletes, meet officials from Pan-America and Europe, as well as referee Canada's top up-and-coming competitors in one weekend, and eat poutine!

Katrina has been a Women's Artistic Gymnastics Judge for 3 years. What got Katrina into judging was she saw it as a way to further understand the rules to help the athletes she coaches. Judging also gives Katrina the opportunity to give back to the
sport she loves!

In the 3 years Katrina has been judging, her favourite memory is judging at the 2019 Compulsory Provincial Championships in Medicine Hat.

Kimberley is new to judging with this being her very first year as a cheerleading judge! She had coaches for a number of years and this past season decided to move into judging as
well.

Kimberley never competed in cheerleading herself but her
daughter is a cheerleader and that is what got her into the
sport. Kimberly's favourite part of judging is watching teams
hit their routines for the first time on the competition floor. 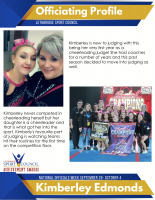 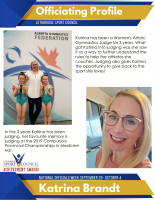 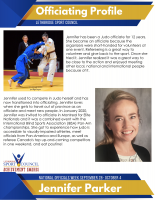 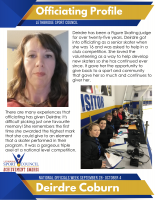 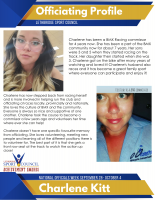 Leah has been an Artistic Gymnastics Judge for the past 4 years! Leah competed in gymnastics herself before becoming a judge. She used to be a competitive athlete growing up, then
moved into coaching gymnastics.

Leah reflects that her overall favourite memory would be seeing the same athletes move through the levels over the years.
Perfecting skills, learning new ones, and watching how excited they are when they nail it! Judging the Junior Olympic
Championships is always a great time because the kids have worked hard all year for one of the final showcases of their
routines!

Micheal has been a soccer referee for 22 years. He first started out reffing as a way to earn a little extra cash as a young 12 year old kid! Reffing was like a summer job, just not in the summer. After doing that for a few years opportunities for higher level games came up and it went from there. Micheal is now on the Referee National list and is a Fédération Internationale de Football Association (FIFA)
referee.

Micheal has too many favourite memories from reffing to narrow it down to just one. A few of his favourites are the 2019 U17 FIFA World Cup Quarter Final Brazil vs. Italy in Brazil, officiating Atalanta in a very full Mercedes Benz Stadium, officiating in a very loud sold out Los Angeles Football Club, Banc of California Stadium and officiating the 2010 Canadian Collegiate Athletic Association (CCAA) Gold Medal game in late November. The game was going into the second half of extra time and just before play started a light dusting of snow began to fall. It was probably the most Canadian College final you can have!

Mitch has done his fair share of officiating over the years. A retired hockey referee of 22 years and retired football referee of 4 years; Mitch still continues to be a baseball umpire after 24 years. What initially got Mitch into officiating was his dad.
His dad was a hockey referee and a baseball umpire when Mitch was a kid. Mitch did a few little league games as a kid growing up in Raymond and enjoyed it. Then one day, his dad did a game for a high school tournament and he handed Mitch
his equipment and walked off the field. That was his last game he umpired and that is when Mitch started his career! Mitch remembers being so scared that day but he survived. He realized he didn't know the rules like he thought he did so he
took a clinic the following year and that's when things really got going!

Mitch quickly became 'addicted' to umpiring. He jumped in with both feet and would try to learn as much as he could from books, other umpires and wherever else he could get information. Mitch loves baseball, and like most players his playing career ended and he tried coaching first. He didn't find his niche in coaching baseball but wanted to still be involved in the sport he loves so he became an umpire! Mitch has considered pursuing a career in umpiring but after a lot of thought and deliberation, he decided he couldn't leave his family behind to chase his dream. Mitch chose to be close to his family, coach his kids in baseball and he is so glad he did!

Having a long and successful umpiring career, Mitch has too many memorable moments to count! Some of the most notable and major tournaments he has had the opportunity to attend are the 2002 Little League World Series, 2008 World Juniors Edmonton, 2009 World Baseball Championships Europe and the 2015 Pan Am Games in Toronto.

Raymond has been officiating basketball for 5 years. What got Raymond into reffing was for the love of the game and giving back to the community. He wanted to integrate himself and his family to the people around him in basketball. Growing up playing basketball, he began to watch the officials more and paid attention to what they do. Though he never imagined he would be one. The bond between his fellow officials keeps him going. As a newer citizen here in Canada, he felt that sport is the fastest way to be integrated in the community.

Raymond doesn't recall a single favourite memory from officiating but officiating is always memorable whenever he brings his sons to his games. He enjoys the fact that they are seeing their dad on the court getting yelled at by fans but still smiling and enjoying it. He believes it is setting a path that someday they may officiate as well. 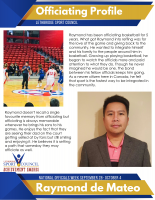 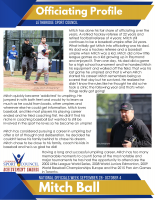 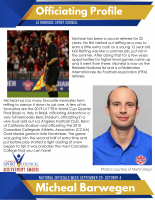 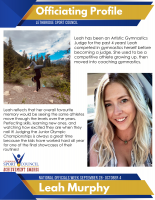 Where are they now?

Where Are They Now? Rachel Nicol

The 2022 edition of SPORT MATTERS is here! Flip through the pages today