Pathway to Participation for Indigenous Families in Lethbridge is funded by the Physical Activity and Recreation Division of the Government of Alberta.

All of Lethbridge Sport Council's in person events including "come try it" events are canceled indefinitely pending COVID-19 restrictions from Alberta Health Services. We will provide updates regarding 2021 programming when we can. In the meantime, we are offering loanable equipment kits for home use, click HERE for all the details.

Lethbridge Sport Council's support to engage urban Indigenous youth and their families in sport and active recreation began in 2018 following conversations with Treena Tallow. Knowledge keepers of traditional games have referred to sports like lacrosse as powerful medicine with healing potential that can contribute to the various dimensions of holistic health for Indigenous youth (The Origin of Lacrosse, Lacrosse Canada, 2008).

Lethbridge Sport Council and our community partners value sport for its impacts physically, socially, emotionally, and mentally. No other domain of community life has demonstrated sport’s capacity to connect so many young people to positive adult role models and mentors, opportunities for positive development, and help to acquire critical life skills.

In the Truth and Reconciliation Commission of Canada Final Report (2015), sport and recreation are identified as tools for social development to improve the health and wellbeing of individuals and communities.

Goals of the project

The Advisory Committee believes in the value and benefit of physical activity, active recreation, and sport on our community.

Telling the Story of Indigenous Sport

The Truth and Reconciliation Report has five calls to action (87 to 91) related to sport. One of the five is to tell the story of Indigenous athletes in history in collaboration with the Indigenous community, sports halls of fame, and other relevant organizations.

Learn how the Government of Canada is responding to the Truth and Reconciliation Commission's Calls to Action 87 to 91 by following this link.

Lethbridge Sport Council encourages local Indigenous and sport communities to submit nominations to halls of fames, sport, volunteer and community awards. Lethbridge sport council has successfully helped submit many award and halls of fame nomination packages. Reach out to [email protected] for guidance to develop a nomination for the Lethbridge Spots Hall of Fame, Alberta Sports Hall of Fame, LSC Achievement Awards or other sport-related award or recognition.

Baptized as Moses Three Persons but known as Tom, his fame was sealed when he won the saddle bronc riding championship at the first-ever Calgary Stampede in 1912.

He went into the competition virtually unknown except to his family and friends, who knew him as a good bronc rider. But he etched himself into rodeo history by taming the legendary bronc Cyclone with a ride that thrilled the Stampede audience and earned him a standing ovation. His prizes included $1,000, a medal, a hand-made trophy saddle, a championship belt and a gold and silver mounted buckle.

Three Persons continued to compete in rodeos and won at most of them. His success and fame inspired generations of other Blood Tribe members and opened the doors for their participation in rodeo. He was also a skilled roper and taught many young men who came to his ranch on the Blood Reserve to learn to rope or ride bucking horses.

Three Persons went on to become a successful raiser of thoroughbred horses and purebred Herefords. He suffered a serious accident in 1946 from which he never fully recovered, leading to his death in 1949 at age 63.

Charleton Weasel Head (Athlete – Basketball) 2008: Charlton Weasel Head rose from stardom on high school basketball courts to starring on the national stage at the university level during an athletic career that has led him into coaching other young athletes.

An all-around athlete at Kainai High School on the Blood Reserve, Weasel Head shone on the gridiron for the Warriors football team. But he was even better with a basketball in his hands, leading the Warriors to success with his scoring, passing and defence. He also starred with the Alberta Juvenile squad in 1995.

In his Grade 12 year, Weasel Head sparked the Warriors to a bronze medal at the 3A boys’ Provincials in Red Deer, scoring 23 points in the third-place victory.

Then it was on to post-secondary ball at Lethbridge Community College, where he was an Alberta Colleges Athletic Conference All-star each of his three seasons with the Kodiaks, including a first-team all-star in his last two seasons. He was the team’s co-Most Valuable Player in his rookie season, 1996-97, and was named to the college All-Canadian squad in 1997-98 while again being honoured as the Kodiaks’ MVP.

Weasel Head wrapped up his Kodiak career with another MVP season in 1998-99, guiding the seventh-seeded team to a fourth-place finish at the Canadian College Championships. During this tournament, he was a 1st Team All-Star.

From there, Weasel Head moved on to the next level, joining the Brandon University Bobcats and was a starting guard on a team that finished as Canadian Interuniversity Athletic Union silver medallists in 2000 and 2001. He was chosen as a second-team all-star in the Great Plains Athletic Conference in 2001 and was a first-team tournament all-star at the 2001 nationals.

The same year, Weasel Head was awarded the Tom Longboat Award for aboriginal sporting excellence and received the Doug Crandle Student-Athlete Award for 2000-01.

After earning his general studies degree at Brandon, Weasel Head returned to Southern Alberta to obtain his Education Degree from the University of Lethbridge. Now a teacher at Kainai High School, he continues to serve as a role model for aboriginal youth and coached the Kainai Lady Warriors into the provincial championships this season. 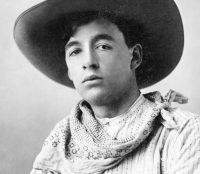 Come-Try-It events are 1 1/2 to 2 hours long and are open to all skill levels while the age range is determined by each sport organization. While Lethbridge Sport Council takes care of the event promotion and registration, the local sport organizations provide the venue and trained coaches. It's an awesome partnership.

Past Come-Try-It participants who tried a new-to-them sport and loved it, received information about the local club, program schedule, registration details, and subsidy program information for registration and equipment.

Venues we have partnered with:

Lethbridge Sport Council would like to host several more training events in the future including but not limited to: 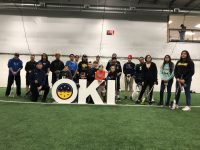 She prides herself in actively playing traditional games with Indigenous and non-Indigenous community members to teach the history, importance, and relevance of the games for children and adults.

She attended a Roving Gyms as our guest in 2020 where she played traditional games with the participant families.

Mary Ellen was also commissioned to make the traditional game of Snow Snakes for our Multicultural Sport & Activity Kit. Our series of seven Activity Kits are for loan by community members and educators to sign out for one week blocks of time to play at home or at school. 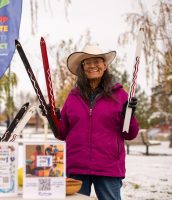 The 2020 #ChangingLives Through Sport campaign.

#ChangingLives Through Sport campaign was launched during Lethbridge Reconciliation Week in 2020. We put out a call for stories about everyday people doing great things using sport, physical activity, and active recreation.

We asked community members to tell us about indigenous sport volunteers, coaches, leaders, and mentors in their life using sports as the catalyst for change.

Two stories are highlighted below.

JOIN the 'Sik-Ooh-Kotoki - Sport Connection - Lethbridge' Facebook Group to stay connected with sport opportunities and news from in and around the land that is Lethbridge, called Sik-Ooh-Kotoki by the Blackfoot people. If you have a sport event, initiative or sport-related news that you’d like to let the community know about, this is a great place to get the word out.

Sik-Ooh-Kotoki - Sport Connection - Lethbridge
Our office is CLOSED to the public. Visit our COVID-19 Update page for more.